Today I am honoured to be part of the Singapore Killer Blog Tour. Thank you to Murray for asking me to take part.

A helicopter crash and burned bodies.
A faceless corpse.
A mysterious town.
It’s September 1953 and Carter is drawn into a dark case from which there seems no escape.
#WhoIsBlackJack

Singapore Killer builds upon the elements we love from the previous installments of Ash Carter. The hardness, his eye for detail that enables him to view a crime scene differently from other people in his profession, and his get in my way and I will destroy you attitude. These aspects are intensified to levels that leave you reeling from chapter to chapter, as Murray gradually reveals a ton of secrets that won’t loosen their grip until you solve them all.

This book begins where every thriller should. By dropping the reader straight into the action. The opening chapters are like a hand grenade going off. All hell breaks loose. A helicopter has come down in the centre of dense jungle in mysterious circumstances. However all isn’t as it seems as it’s burned out carcass is investigated further things don’t add up. Two members of the crew are dead. One from a point blank range bullet to the head. Another passenger is missing leaving a set of handcuffs abandoned inside the cockpit. No record of who was on board can be traced. This situation soon brings in Ash Carter who is going through some personal issues himself. However he soon has to put them to the back of his mind, when this case quickly becomes something that could change everyone’s world as they know it forever.

As the story develops you find yourself as a reader being guided to clues, asked to make your own choices. I really enjoyed this because Murray’s writing is never predictable, and for somebody who reads alot of this genre its a joy. At no point during the narrative did I feel I knew how Ash or any of the characters were going to act. Plus when important decisions were made by characters I always felt that Murray could of taken the story in several directions, and it would still have produced a satisfying conclusion.

In Singapore Killer Murray moved away from the usual story-lines associated with this type of thriller, giving a fresh perspective to how these types of books can be written. Throughout the story I was never told how to respond to specific characters which allowed me to put together a complete picture of a character, and then Murray would blow it up in the next paragraph. This caused an intense feeling as a reader that you won’t in control during an already deeply complex narrative.

The evolution of both Ash and minor characters in the fifth chapter of this series is some of Murray’s finest writing to date. I can’t wait to sample more. The reason I was more involved in this new adventure than the previous books is because Murray deliberately places Ash in scenarios where he is unsettled. Where the right decision isn’t what it seems. As an avid reader of this genre I am finding myself been drawn away from the good guy who kicks everybody’s ass and leaves without a scratch on them. I prefer protagonists who have both darkness and light. I want characters to have both internal and external conflict. Murray wrote this beautifully in Singapore Killer with Ash. Throughout the entire narrative you witness him wrestling with both seen and unseen demons, and you never know what his next move will be.

My only criticism is that sometimes it can become over-descriptive which unintentionally causes the tension to decrease. This can be frustrating when you want Ash to maintain the head of stream that has been developed in spades. This is a small critic, and doesn’t take away the talent displayed by Murray in using a range of locations from both urban streets, to a dense humid jungle that makes your skin crawl as Ash goes deeper into his own horrors.

In conclusion this installment to the Ash Carter series is an experiment by the author to see how far he can push both Ash and his readers. This is a white knuckle ride into the very depths of what we see as the ultimate crime. I found myself needing both a break and not wanting it to let up. Ash Carter is back, and I hope he is around for along time to come. It is a wonderful mix of intriguing characters and action. Well done Murray. It receives 4 stars on the rip-roarer scale.

I have always enjoyed writing and, as a child, I even managed to be published in both the Times Educational Supplement as well as my local paper the Lichfield Mercury. Unfortunately, this didn’t lead to publishers knocking on my door. After studying Physics at the University of Southampton followed by Applied Mathematics at Cambridge, I entered the very different world of Consumer Credit.

Although I edited Credit Risk International for a year, contributed and edited 3 textbooks and wrote two more, my passion has always been with fiction – in particular, thriller and crime writing. Surprisingly, I discovered there is quite a large overlap between credit risk and crime writing – not least, the amount of logic, problem solving and analysis that each requires.

I have been writing as a hobby for more than 10 years and, after a lot of encouragement from my wife, finally focused on getting something published. My first book, I Dare You, is available as a paperback or Kindle version through Amazon and was followed up in 2017 by the sequel, Dare You Twice. My second work, Map of the Dead, allowed me to indulge my passion for Egyptology and will be followed up by Secrets of the Dead in 2018. Black Creek White Lies, based in Cornwall, is a stand alone written for my mother. The Ash Carter series was influenced by my father’s experiences in the Royal Military Police in 1950s Singapore. Singapore Girl is the second in the series and Singapore Boxer the third. Hopefully 2019 will see episode four.

Born in Greater Manchester, England, I have gradually moved south until I reached the beautiful Dorset coast where I now live with my wife and family. Having young children and an all-consuming passion such as writing doesn’t leave much free time, but when I do take a break I enjoy running and cycling, kayaking along the gorgeous River Stour and building sandcastles with my children. To find out more about the Ash Carter Series click on this link. https://www.amazon.co.uk/Murray-Bailey/e/B01J811866?ref_=dbs_p_pbk_r00_abau_000000 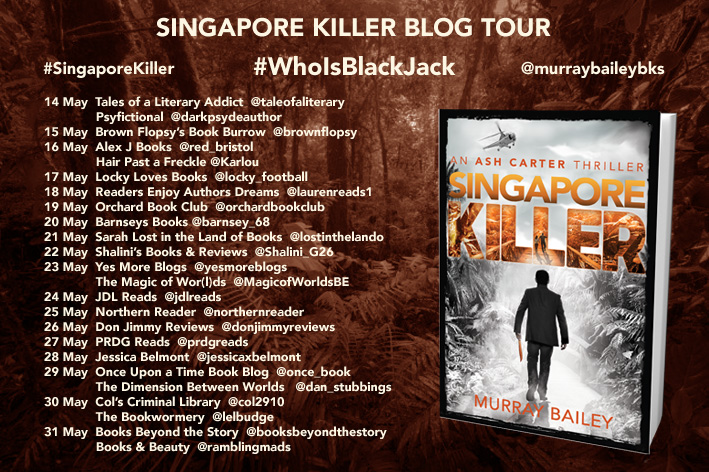 I received a copy of the book from the author to take part in the blog tour. This doesn’t affect my views.