Gods of the Black Gate was one of my standout novels for 2018. A delicious dark abyss of murder, manipulation, and creepy that made the dark demon within my heart sing. To say I devoured it would be an understatement. I inhaled it in two sittings. I personally thought that it stood up brilliantly as a standalone. However, I did have some unanswered questions about Rogers and the man that has haunted my dreams Craig Smiley.

Therefore, I was delighted when Joseph informed me he was writing a sequel called Beyond the Black Gate and did I want a review copy. I jumped at the chance. I couldn’t wait to fall back into this oasis of dark treats that hasn’t left me since the first book.

The good news is Joseph has outdone himself. Creating a plot and world that oozes off the page in a lake of light and dark exploring character flaws, environments, and chilling dialogue in such detail that engages readers from the first page. Taking them on a mind-bending adventure that straddles multiple genres from horror, fantasy, and detective mystery. As chapters unfolded, I found myself imagining a lovechild mixed between Frankenstein and The Harry Bosch books written by Michael Connelly, as our cast of disgruntled, damaged, unwanted heroes try to understand their own views on the reality they find themselves in.

Every chapter added something interesting pulling you deeper in the abyss of madness that Joseph has created. Whether it was a new complicated character, landscape, or a peer into the minds of the multiple viewpoints Joseph utilises throughout the narrative. You couldn’t help but be enthralled as he opened windows to ideas you quite simply didn’t know were possible. Joseph has been able to go beyond the perimeters and troupes of specific genres, and engineer something that is a work of art.  I can’t wait to see what he produces next. He is fast becoming one of must-read writers I love his words.

Beyond the Black Gate opens with Rogers down on his luck sat at a bar not knowing what to do next. His nemesis the evil mastermind Craig Smiley is gone murdered by his own hand. His years of torment at the hands of Smiley finally at an end. He should feel complete. His demons extinguished, and yet he can’t seem to shake the feeling that something isn’t quite right.

This thought takes us as a reader into world of wonders that ensnares the senses, and opens dark corners of our own minds that we never knew existed. As he brings back the demon that is Craig Smiley. This revelation scared the shit out of me. How could Joseph bring him back. What was going to be the next chapter within his demonic story? It had me both intrigued yet at the same time worried that Joseph would stray away from what makes Smiley so terrifying. I shouldn’t of been concerned. Joseph adds another layer to Smiley that makes him more manipulative and cunning than I ever thought possible as he goes on a quest through his own personal hell in search to understand why the gods betrayed him?

An element I wasn’t expecting however and was pleasantly surprised by in the evolution of Smiley was the relationship he creates with a character called Pheona. A mysterious woman that has her own story to tell. Joseph gives hints throughout about her true identify however your never quite sure if he’s telling the truth. I greatly enjoyed this subplot as I tried desperately to join up clues, as both her and Smiley hide their true natures from one another making you wonder who would be the first to strike a deadly blow. This produced an interesting dilemma, allowing for some detailed dramatic scenes which added wonderful characteristics to both individuals, making you as a reader explore this dynamic further to find out how it all ends in this ever-changing landscape of disillusions and fears that rapture the fundamentals of Smiley ideology.

As I continued to turn the pages, I couldn’t help but begin to draw comparisons with Dante, and Egyptian mythology when reading Smiley’s trek through the vivid and desolate landscape of his self-imposed hell as he is presented with his sins. These scenes are written so expertly that you feel as if you’re Smiley encountering these threats having your mind invaded with dark thoughts as you fight to become you once again.

Every character’s story from the first entry in this universe is developed with quirky and explosive consequences that drove the plot to a frightening but satisfying conclusion. I adored how Joseph showed our characters different struggles whether it was survivor’s guilt, or alcoholism. Joseph can explore these complex issues with sensitivity and the precision of an expert surgeon. Taking us into his world effortlessly, moving the goalposts of what we should except from fantasy and mystery.  This is a delicious cake of complex character development and world building that you hope never ends.

I love Joseph’s voice and how he makes shivers run down my spine with the smallest amount of description. Beyond the Black Gate is a wonderful sequel, and answered all my questions. You won’t be disappointed well-done Joseph. 4.5 Stars.

The Mountain on the planet of Icefall holds the mystery to a lost colony and an irresistible, fatal allure to the climbers of the universe. Maggie is determined to be the first to make the summit. Aisha, injured in a climbing incident herself, has always supported her wife, trusting Maggie would return from her adventures. But no one ever returns from the Mountain.

This fast paced novella has everything a sci-fi fan could wish for. Creepy AI’s, space-travel, futuristic technologies, lost colonies, unconquered mountains and planets you cant help but want to explore.

The story is told from the viewpoint of spacecraft pilot and injured climber Aisha. A character that as the plot thickens, we discover has many secrets that as we dig deeper begin to expose some unpleasant truths about her past and future. One of them being her ongoing fight to support her wife’s ambitions of been the first climber to summit the mountain on Ice Fall. As she continues to struggle with the ongoing pain surrounding her mysterious headaches, and secrets coming from all sides we as a reader begin to wonder about what truly lurks beneath the surface of these two main characters. At times it made my skin crawl as I became more and more submersed in this vivid world of Stephanie’s creation. Hoping with every turn of the page to uncover what the mountain held.

One of the joys of Stephanie’s writing is that it makes you feel unsure and disturbed. She just has that amazing quality which every writer I like to read has, where you think she leading you down one path but then totally flips it on it’s head and makes you go what the hell. I loved it. These characters and world grab you from the moment you open the cover, and dont let go whisking away on an adventure that will make you question everything you think makes you human. When the story begins we are told that the planet us humans call earth has long been destroyed. Erased from the universe by wars, greed, and feminism meaning humans have had to colonise, and develop technologies that help them to thrive in a new environment known as Icefall.

An ice colony in the far reaches of space with a mountain nobody has conquered. Many have tried as the climb isn’t difficult, but for some reason nobody ever seems to return. Some trip never to rise, some fall asleep never to wake, and others step off the edge without so much as a scream. Making you wonder the entire time what dark secrets does it hold.

The level of detail Stephanie goes into when describing the climbs on this fictional world is astonishing. From the equipment they use to how their breathing changes as they rise is done with breathtaking accuracy. Throughout these passages I felt as though I was Maggie and I was there to conquer this beast that lay before me this allowed me to fully submerge myself into this imaginative world, and become the character which is something I always look for. I couldn’t wait to read on. For a novella it is jam packed with ideas. However at no point did I feel short changed with every thread concluding with an unseen twist or ending I enjoyed.

My only criticism would be that sometimes you lost who was speaking in some of the dialogue. Therefore causing a drop in some of the tension that had be created. However this was a small thing in what otherwise was a well polished novella, with a unique idea and plot.  It gets 4 stars from me a highly enjoyable read. I will be recommending it to other sci-fi fans. 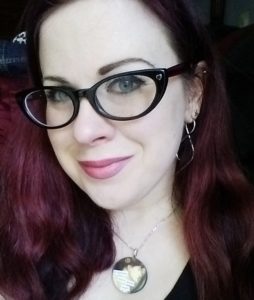 Stephanie Gunn is an Aurealis and Ditmar award nominated author of speculative fiction. In another life she was a research scientist. Now she spends her time writing, reviewing and reading. And buying far too many books. She lives in Perth with her family.

I received a copy from the publisher in exchange for an honest review. This doesn’t affect my views.