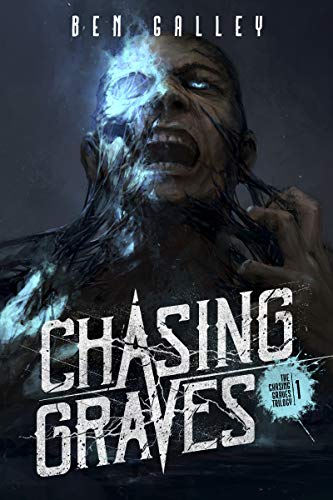 Honoured to be part of the Ben Galley Ultimate Blog Tour. Thanks to Dave for inviting me.

Meet Caltro Basalt. He’s a master locksmith, a selfish bastard, and as of his first night in Araxes, stone cold dead.

They call it the City of Countless Souls, the colossal jewel of the Arctian Empire, and all it takes to be its ruler is to own more ghosts than any other. For in Araxes, the dead do not rest in peace in the afterlife, but live on as slaves for the rich.

While Caltro struggles to survive, those around him strive for the emperor’s throne in Araxes’ cutthroat game of power. The dead gods whisper from corpses, a soulstealer seeks to make a name for himself with the help of an ancient cult, a princess plots to purge the emperor from his armoured Sanctuary, and a murderer drags a body across the desert, intent on reaching Araxes no matter the cost.

Only one thing is certain in Araxes: death is just the beginning.

Chasing Graves is the first book I have read by Ben. I pleased to report that it won’t be the last. Ben has created a unique world in Chasing Graves going beyond the realms of what I have encountered in the world of fantasy before. The setting of Chasing Graves is what grabbed my attention initially. Araxes. A sprawling city of dark corners, broken laws, and loose morals. Where you don’t know if every step you take is going to be your last.

Ben describes Araxes in all its glory from its ghostly streets to the ruling classes of the nobles that hold this ancient city in an iron grip. Ben taps into all the senses enabling the reader to create a detailed image in their mind of the history and myths that surround Araxes. This was what I enjoyed the most about the book. The reason being is because even though this is a city of magic, cutthroats, ambitious nobles, and politics that you will find in most epic fantasies. Ben uses these well-worn tropes and turns them on their head creating an interesting currency that shows a person’s status within the world he has created. Instead of it being gems, money, and land. It is copper coins and shades which are souls bound to the world after death as a final gift from the gods.

This was a great twist on the Greek myths of the ferryman and the River Nyx. Asking the question of the reader how important is your soul? These sections are written so well from the viewpoint of Caltro Basalt a thief and good for nothing cheat. After he becomes a shade himself when he is murdered on his first night in Araxes by a gang of soulstealers lead by the ruthless Boran Temsa. Caltro is the only viewpoint that is written in first person throughout a book that has several viewpoints. I loved this as it allowed me to explore Caltro’s mind as struggles to understand the reasons behind who he is, how he goes about seeking revenge, and fights for his freedom from his enforced enslavement. We hear all his frustrations, and root for him to succeed as life continues to throw obstacles in his way giving us a unique look into how precious the soul is and how even after death we suffer pain.

The other viewpoints Ben includes in this engrossing epic fantasy is the ruthless Soulstealer Boran Temsa. He was favourite character. I loved the description of him. Straight away I could feel his relentless anger, smell his poisoned sense of the world and taste his hunger to improve his social standing. He drew me in making me want to know more about the criminal underbelly in which he lives and thrives to dominate. He is played off against another wonderfully executed viewpoint the empress in waiting Sisine. She is one determined woman, who will stop at nothing to come out on top in the game of deception that is being woven at the heart of Araxes. Both viewpoints enable the reader to explore all sides of the divide that exists within both characters circles of interest and when they finally meet it is explosive.

The final viewpoint Ben gives us is Nilith. A character that is used to take us away from the intoxicating streets of Araxes. Allowing us to explore other parts of the world in which the narrative is set. I adored the hilarious conversations between Nilith and her dead husband shade that helps bring a much-needed humour to what is otherwise a grim tale. This viewpoint is executed to great effect making you follow the clues to discover what secret Nilith is truly hiding. There was at times a predictability to Nilith’s arc. Yet this didn’t affect my enjoyment or disappoint me when the reveal occurred.

Ben has been able to give some well-worn tropes a new lease of life and at the same time add his own unique stamp to the ever-growing landscape of epic fantasy. This character driven narrative does exactly what it says on the tin. It is perfectly balanced between fast paced action and well fleshed out characters that keep you coming back for more. A highly recommended dark fantasy. Well done Ben. You receive four stars.

I received a free copy in exchange for an honest review and to take part in the blog tour. This doesn’t affect my views.